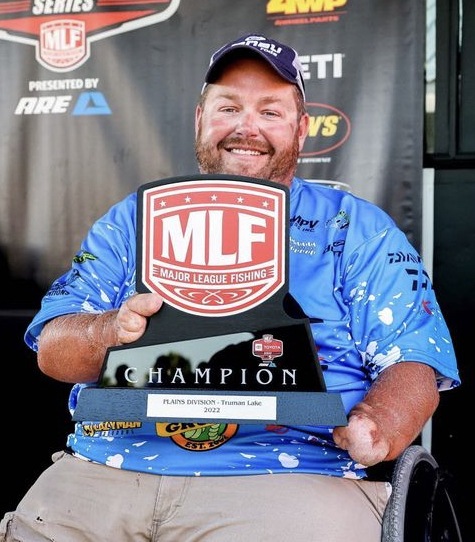 A more inspiring story might not be possible to tell. Angler Hunter Baughman took the win at the Truman Lake Toyota series with a jaw-dropping 48-10 total. Day two saw him catch an impressive 17-6, which allowed him to the top five slots. His final day efforts brought the biggest single catch of the entire tournament at 19-1.

Hunter’s winnings come to $33,929, in addition to the glory. This win also marks the very first national win for Hunter, who, up to this point, had only competed and won in statewide tournaments.

One of the reasons Hunter managed to bag so many fish is the Brazalo jigs he helped design. He entered with two jigs on hand, a 3/4-ounce football jig and a 5/16-ounce finesse jig, but found that the fish seemed to prefer the 3/4 ounce. In fact, one fish that got away on day one ended up being re-caught by Hunter!

In addition to his jigs, Hunter had a different strategy to target fish. Instead of graphing, he would use his LiveScope to identify stumps where fish might hide. This technique proved fruitful, netting a worthy catch after every ten stumps or so.

As the anglers in the other fishing boats would rely on side imaging, Hunter was honing in on locations with superior results. His practice routine was vital, as he marked over 100 waypoints over three days, particularly rock piles and brush, as well as depths up to 15 feet. Hunter reveals that most catches happened between 8:30 and 10:30 a.m.

Overcoming Adversity to Become a Hunter on Bass Boats

When Hunter was nine months old, he contracted bacterial meningitis, resulting in the loss of his left hand, several fingers on his right hand, and both legs below the knees. Despite his handicap, Hunter learned to become a brilliant angler and made bass boats his second home.

In addition to being a competitive fisherman, he is also a motivational speaker, thanking God for being able to live out his calling and praising the doctors who saved his life. He lives with his wife, Andrea, and their daughter, Kinley, in Judsonia, Arkansas. Their second child is due in November 2022. You can learn more about or contact Hunter through his website.

?The Cajun Baby? Cliff Crochet Brings Conservation to the Forefront of Fishing