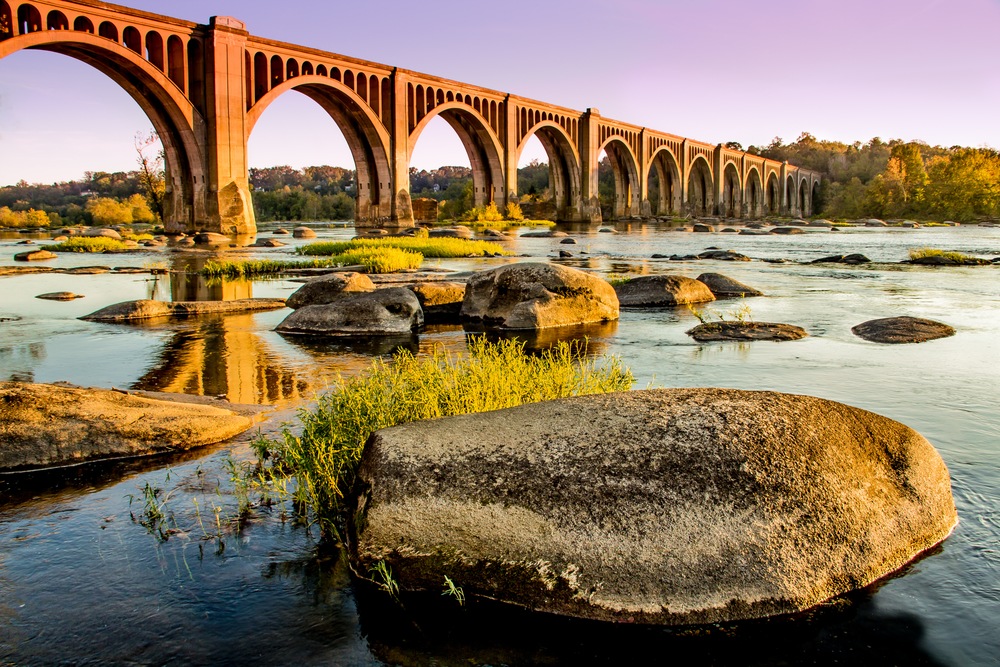 For the fifth stop of the 2022 Tackle Warehouse Pro Circuit, our bass fishing tour is taking us to a relatively new venue for the pros. The James River in Richmond, Virginia has hosted many bass tournaments over the years, but they have mostly been limited to competitions other than the Pro Circuit. That said, there is no time like the present for our pros to add to their legacies with successful outings on the James River next month.

The James spans roughly 340 miles that stretch throughout the western portion of Virginia, in the foothills of the Allegheny Mountains. It eventually empties into the ocean-adjacent Chesapeake Bay, which explains why the river has a higher concentration of salt in its eastern end. Interestingly, the James River is stocked with Florida-strain largemouth bass, which is why we expect to see the pros reeling in fish weighted in the double digits.

By this point of the season, many bass have completed their spawning patterns. However, that isn’t to say that there aren’t still some that will be spawning in the James River. Even with over 150 pros in play, we expect there to be plenty of fishable water – after all, the James River boasts about 60 to 70 miles of “good” water, where the anglers will be able to snag big catches throughout the event.

The James River is packed to the gills with both emergent and submergent vegetation, as well as hard cover, which gives fish plenty of structure to flock to for shelter. For this reason, the 5th stop of the Pro Circuit could be won by casting a line in the shallows. Keep your eyes close to shore and around bodies of vegetation – we suspect that that’s where the excitement will be.

Blazer pro Spencer Shuffield is looking forward to the James River’s topography. He had the following to say after wrapping up a 7th-place finish on Lake Guntersville, “going to a place like the James, it almost makes it easier, because they don’t go offshore much at all and I know I’m going to be shallow the entire time and be able to lock into that right off the bat.”

Why is the 5th stop so exciting for Spencer? After completing two thirds of this year’s circuit, Spencer is currently sitting atop the standings – still! With 732 points to his name, Spencer is locked in and looking to add to his lead over the final two stops of the Pro Circuit. For updates on what happens at the James River and beyond, stay tuned to the Blazer Blog!