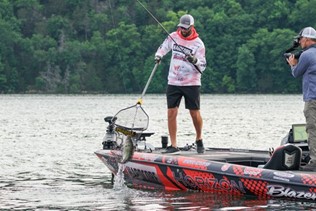 The Big G – or Lake Guntersville, to those less acquainted with high-level bass fishing – lived up to its moniker during the 4th stop of the 2022 Tackle Warehouse Pro Circuit. During this event, anglers needed to end each day with huge catches to have any hope of climbing the rankings. Even then, there was one familiar face that sat atop the standings for three of the four days.

Blazer pro Spencer Shuffield has enjoyed a successful 2022 campaign thus far and even came to Lake Guntersville as the leading favorite to win Angler of the Year. Before competition kicked off at the Big G, Spencer had a narrow 6-point lead over the second place angler. After concluding the fourth stop of the Pro Circuit, Spencer’s margin over second place has doubled! Now, he sits at 732 points – 12 more than his next closest competitor, Josh Butler.

Spencer came firing out of the gates on day one, reeling in an impressive 25-pound, 6-ounce bag of five catches. He finished the first day with a lead of over three full pounds over second place – a lead that Spencer would maintain throughout the event until the start of the final day, during which all weights are zeroed out.

Lake Guntersville is where Spencer fished his first event as a pro angler, and he perhaps saved his finest performance on the Big G for this year’s circuit. It was no coincidence that he dominated the competition from day one, either. While practicing for the event, Spencer discovered a huge school of fish in the waters of Lake Guntersville and leaned on it for huge catches during the first three days of the event.

After a successful outing in Guntersville, Spencer chimed in on what he loves so much about fishing here for the Pro Circuit. “I see why so many guys are living here. This is a fish factory. This place is full of fish and full of grass. It’s an amazing fishery.” Spencer was able to do most of his damage casting Hardcore Bullet Crank 7+ and 5+ crankbaits with Phenix Recon Elite rods.

Spencer’s 7th-place finish at Lake Guntersville was enough to add $17,500 in winnings to his 2022 pot and to double his lead over other anglers in the race for Angler of the Year. Fellow Blazer pros Evan Barnes (46th) and Tyler Woolcott (96th) are still fighting tooth and nail, as well, to make as much progress in the standings as possible during the last two stops of the year. Coming up next, the pros will be visiting Richmond, Virginia for stop 5 on the James River. Check back on the Blazer Blog for all the latest updates!