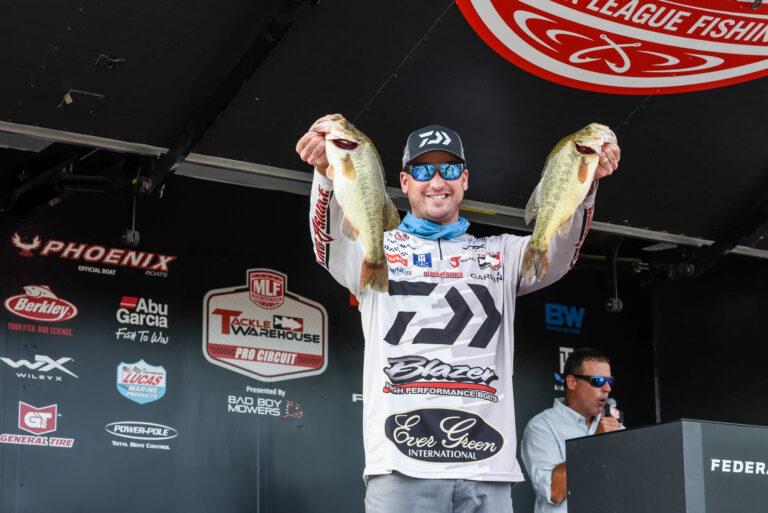 As we expected, the fishing done on the Potomac River for the fifth stop of the Tackle Warehouse Pro Circuit was nothing flashy – but it didn’t have to be! With tons of postspawn fish to go around, and a myriad of creeks to find them in, the pros largely kept it simple with a few variations of historically successful baits on the vaunted Potomac River. With just one final stop left after this pivotal showdown, how did the competition stack up?

We witnessed history being made on the river as Jacopo Gallelli dropped 20 pounds flat on the scales on the final day of the weekend to seal his most noteworthy win yet. The kicker? Jacopo is still competing in his rookie season, and this was the first Pro Circuit event win for a European ever! He was able to reel in this career-defining moment after a disastrous showing last month on Lake Eufaula, in which Jacopo finished 150th.

Once again, Blazer’s family of pro anglers came to the fishing grounds this month ready for battle! Every fish counts as we inch slowly closer to the conclusion of this unforgettable tournament. So, how did our pros stack up? Evan Barnes (94th), Jason Lambert (73rd), Bradley Dortch (44th), Tyler Woolcott (41st), and Spencer Shuffield (11th) all made waves on the river, but it was Cody Meyer (3rd) who came tantalizingly close to the event win.

It’s no wonder Cody found so much success on the Potomac. After all, he likens it to some familiar fishing grounds in his home state! “I grew up fishing northern California, and the California Delta is very similar to the Potomac River,” said Cody. “I don’t have a ton of experience on the California Delta, but one thing I do know – I’ve made some top 10s there, and when I have, I got into one or two areas, put the trolling motor down, fished around those areas and never even looked at the tide. I just want to get into a couple areas I know there’s fish and fish through the tide cycle.”

Cody’s approach to river fishing has earned him significant success by notching two top 10 finishes in his last two events on the Potomac River. This year, Cody accomplished much of his fishing with a 3/8-ounce Z-Man Evergreen ChatterBait Jack Hammer and a 3/8-ounce Evergreen Grass Ripper swim jig. For both baits, he relied on a medium-heavy 7-foot, 3-inch Daiwa Tatula Elite rod.

With the Potomac River in our rearview mirror, there is just one step left separating our competitors from the championship on the Mississippi River. Next month, the field will head to the St. Lawrence River in New York and look to lock in their standings for the Pro Circuit finale. With two of our pro anglers sitting pretty at 17th (Spencer Shuffield) and 9th (Cody Meyer), there is a real possibility for the Blazer family to bring home some serious winnings. Stay tuned to the Blazer Blog for more bass pro news in the coming weeks!

4 Gifts That the Angler in Your Life Will Love