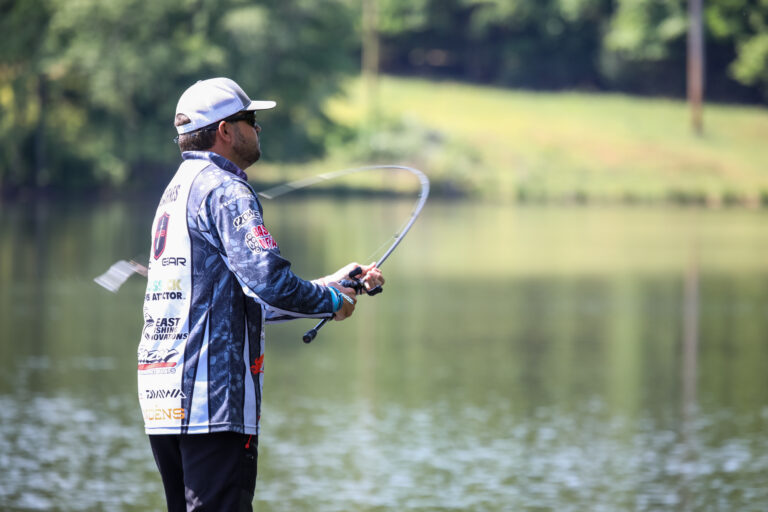 Since our last update, the Tackle Warehouse Pro Circuit has made two more stops along its tour of some of our country’s greatest fishing grounds. Once again, Blazer Boats’ pros stood out with noteworthy performances at both Lake Murray and Lake Eufaula. With just two more stops left this year before the tournament comes to its close, join us in catching some details about these two events!

Known as the “Jewel of South Carolina,” Lake Murray has hosted numerous Fishing League Worldwide Cups in the summertime, when the fishing has been tough. However, this year, anglers were treated to seeing what Lake Murray truly has to offer as both postspawn and spawning fish populated the waters. This came to fruition as many anglers reeled in 20-pound bags throughout the event – meaning a single day haul of five fish totaling over 20 pounds.

Pros sponsored by Blazer Boats dominated the waters at Lake Murray this year. Evan Barnes was one of just eight anglers who had 20 total fish to show for his excellency, which was good for a 7th place finish and $17,000 in winnings! Cody Meyer and Dean Rojas also reeled in 16th and 20th place finishes, respectively, thanks to consistent production throughout the four-day event.

With 45,000 acres of bass habitat along the Alabama-Georgia line, Lake Eufaula is considered the “Bass Fishing Capital of the World” – a fitting location for the fourth stop of the 2021 Tackle Warehouse Pro Circuit! While Eufaula is home to some spotted bass, it is the population of largemouth that receive the bulk of attention from anglers.

With only two stops left after Lake Eufaula, this leg of the Pro Circuit is key to the final standings, as well as the race for Angler of the Year. Evan Barnes, Spencer Shuffield, and Cody Meyer finished 43rd, 53rd, and 59th, respectively – all earning $10,000 in winnings and valuable leverage in the Tackle Warehouse standings.

Throughout the event, the shallow bite ended up being a dominant player over the deep bite, which many of the top anglers catching their fish up shallows in some sort of bank grass, shallow wood, or hyacinth. Lures like swim jigs, buzzbaits, spinnerbaits, frogs, and punching plastics played significant roles in big catches all weekend long.

A Race to the Finish

With two thirds of the Tackle Warehouse Pro Circuit in the books, it’s shaping up to be a photo finish. Three of our incredible anglers – Cody Meyer, Spencer Shuffield, and Evan Barnes – are positioned in the top third of the standings with incredible opportunities to jump ahead of the competition at the Potomac River and St. Lawrence River when the Circuit swings through the northeast for its last two stops of the year. Stay tuned to the Blazer blog to learn more about the outcome of the 2021 Tackle Warehouse Pro Circuit at Potomac River from June 17th-20th.