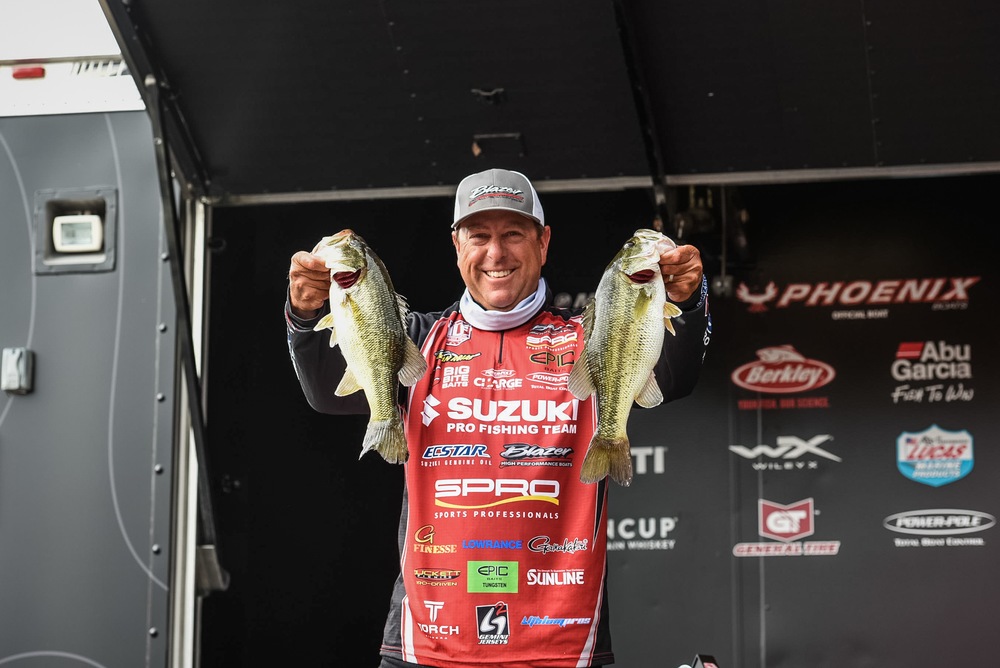 At Blazer Boats, we are proud to sponsor an extensive family of professional anglers! With years of competitive experience and countless tournaments under their belts, these fishermen don the Blazer insignia as they square off with the fishing world’s best month in and month out. Read on to learn more about many of our beloved pros, including their interests and impressive accomplishments! These are only some of our prestigious anglers so keep an eye out for part two to learn more about the rest of the Blazer family.

Dean has been with Blazer Boats for several years, notching 59 top 10 finishes and over $2.5 million in winnings throughout his illustrious tournament fishing career. He holds one of the most impressive records in bass-fishing history: the heaviest single-day weight ever recorded in a five-fish-limit format – 45.2 pounds in 2001. In his tournament downtime, Dean likes playing golf, off-roading, and fishing casually with his two sons.

Bradley first ventured into competitive angling at age 12 when he would enter local tournaments with his dad. Over the years, his skill and passion for fishing has grown exponentially, yielding a career that boasts two career wins and 69 total events fished. Now a household name in the annals of top-level tournament fishing, Bradley also enjoys golfing – though he admits that he is much better at fishing.

Even though Jesse is sitting out the 2021 angling season due to medical hardship, he is eager to return to the competitive circuits as soon as possible. Until now, Jesse has boasted a fishing resume which includes 2017-2019 B.A.S.S. Elite Fisherman, numerous top 10 finishes, and even his own limited liability company – Enigma Fishing. Keep a look out for Jesse’s return to pro fishing soon!

With 7 career wins and 20 career top 10 finishes, Jason is a force to be reckoned with. He holds the incredible record of highest four-day weight total in the history of the Fishing League Worldwide, racking up 101 pounds and 9 ounces at an event on Kentucky Lake in 2018. When he’s not reeling in bass, Jason enjoys turkey hunting, crappie fishing, and Tennessee football.

From Pierre Part, Louisiana, Cliff Crochet has been rocking the pro angling world since 2010. With the distinctive nickname “Cajun Baby,” Cliff traded in his Louisiana sheriff’s badge when he first arrived on the scene and has racked up 23 top 20 finishes since then. After hunting tournament victories, Cliff also enjoys game hunting, coaching youth football, and being a stay-at-home dad.

Cody recently took home a 3rd place finish at the Lewis Smith Lake event for the Tackle Warehouse Pro Circuit and success has been a consistent theme of his pro angling career. He also has the distinction of once holding the world record for largest spotted bass – a 10.8-pound catch that he reeled in during an event in 2016. One career win, 31 top 10 finishes, and 32 top 20 finishes are all incredible accomplishments of his still-burgeoning career. Cody loves to fish all the time, but he also finds time to collect pollen and relax with his family.

With so many event victories and career earnings, it is no wonder why Blazer Boats is proud to sponsor these incredible anglers and others. Look out for part two, where we will highlight the other fishermen included in the Blazer family. To learn more about our extensive lines of bay and bass boats, stop by your local Blazer dealer today! Our boats are designed with angling excellence and tournament dominance in mind so you can succeed just like the pros.

Get to Know the Brand New Blazer Bay 2440

Meet the Blazer Boats Family of Pro Anglers, Part Two Get to Know the Brand New Blazer Bay 2440 New Year, New Competition: Looking Ahead to the Pro Circuit Kickoff Treat Yourself to the Gift of Fishing with Blazer's Angling Boats