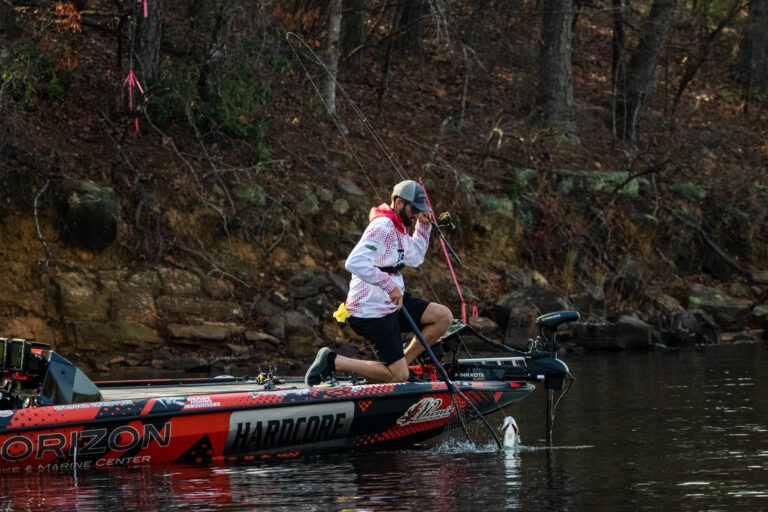 Last month, Blazer Boats introduced you to many of the incredible anglers that we are proud to sponsor. Now, we’ll be highlighting the rest of the experienced fishermen who make up our awesome family of pro anglers! Continue reading to learn more about our beloved professionals who represent Blazer Boats both in fierce angling tournaments and recreational fishing throughout the year.

As the son of legendary Fishing League Worldwide angler Ron Shuffield, it was seemingly Spencer’s birthright to join the Tackle Warehouse Pro Circuit as a perennial threat to win Angler of the Year! In his five years as a co-angler on the FLW Tour with his father, Spencer finished in the top-10 standings each and every year. Nowadays, Spencer terrorizes the competition and local tournaments alike, even going so far as to reel in three top-10 finishes in the 2020 Tackle Warehouse Pro Circuit.

After qualifying through the 2016 Toyota Series, Evan Barnes is currently enjoying his fifth year competing in the MLF Pro Circuit. Going into this year, Evan had notched fifteen top-10 finishes and finished 71 total events – and he may be saving the best for this year, as well! After an incredible 7th place finish on Lake Murray and an impressive showing at Lake Eufaula this year, Evan is currently ranked at 44th overall on the FLW leaderboard going into its last two stops.

Tyler Woolcott joined forces with Blazer Boats starting during the 2020 season and it was a fairy tale ending for both sides. After stating that his Blazer is “the best performing boat I have ever been in, not only speed- and handling-wise but also with the overall layout and fishability of this boat,” it’s no wonder why Tyler has fallen head over heels with his platform! At only 22 years young, Tyler has a promising career ahead of him.

It wasn’t enough for Tristan McCormick to break records on the collegiate circuit with Bethel University! Now, he’s taking his game to Major League Fishing and looking to make some noise with the big boys. With four top-10 finishes and 22 total events fished, we’re excited to see what the future has in store for Tristan.

Growing up, Chris Williams had two dreams. The first was to be in NASCAR, which Chris fulfilled by working 14 years as a pit crew member. Now, Chris works hard to fulfill the other dream he had – being a professional bass angler! With 18 total events fished already in his pocket, Chris is excited to build on that dream and share his vision with others that all it takes is that first step to get back on course.

Based out of Covington, Georgia, Barry Stokes has enjoyed tournament success on the MLF Circuit as well as the American Bass Anglers Couples Series. Barry and his wife April once took home first place at a Couples Georgia D2 event held at Lake Jackson, with April earning honors of Big Fish for the Ladies with a 4.53-pound Lunker! When competing alone, Barry has still found success against his peers, even going so far as to claim first place at the T-H Marine FLW Bass Fishing League Bulldog Division tournament on Lake Oconee in 2019.

Kevin kicked off the 2021 season of the Power-Pole Pro Redfish Tour with an impressive 13th-place finish in Louisiana – his first event of the year. Along with co-angler Kyle Oden, Kevin was able to reel in 30.03 total pounds of fish. After encountering some issues that ended his second event prematurely, Kevin is looking to swing for the fences the rest of the year and make a statement during the Power-Pole championship qualifier schedule.

And that does it for all thirteen of the incredible anglers that Blazer Boats is fortunate to call our pro family! These fishermen represent the Blazer brand with pride year in and year out, and their long lists of accolades are more than enough to prove that they have earned their place in the professional fishing world. If you missed part one, be sure to check it out here to learn more about the other awesome anglers that weren’t included in part two, then check out our amazing lines of Blazer bay and bass boats to see the vessels that propel our anglers to victory!